Your Dog's Heart Blog
HeartOfYourDog.com / Family/Pack / Should you think of your dog as a “pet”? 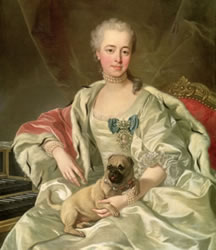 In the beginning humans domesticated dogs for utilitarian purposes. Dogs helped as hunters, herders, protectors, and pack animals. It was only later that they became emotional companions. Owning a dog primarily for personal reasons was a luxury. Since most people spent their lives in extreme poverty, who could afford an extra mouth to feed? Dogs had to justify their existence. Not true for royalty and the upper class. By the 16th century small breed dogs became fashionable for those who could afford them. These dogs are known today as “toy” dogs or “lap” dogs. It’s no surprise that these dogs were treated as toys. Around the same time the English word pet came into existence.

The Oxford English Dictionary offers some insights about the original meaning of pet. The traditional definition it provides is “Any animal that is domesticated or tamed and kept as a favorite, or treated with indulgence and fondness.” Soon after the introduction of small breed dogs pet also came to mean “an indulged and usually spoiled child” and “any person who is indulged, fondled, or treated with special kindness or favour; a darling, favorite”. This is why pet, also means fondle, stroke, and pat today. What is more revealing is that by the end of the 16th century pet also came to mean “Offense at being (or feeling) slighted or not made enough of…to take (the) pet, to take offense and become ill-humoured or sulky.” This language shows how these dogs were raised and treated as objects. The attitude of a dog as little more than a toy has persisted. It lives on when we use the word pet to describe our dogs.

This is why I don’t use pet. It is not about political correctness. Your dog could care less what words you choose to use. Its feelings won’t be hurt. It’s nothing like an ethnic slur. The issue is what’s in your head when you think of your dog as a pet. Our dogs deserve to be treated as the thinking feeling animals they are. They deserve full membership in our families. They are not toys.