Your Dog's Heart Blog
HeartOfYourDog.com / Family/Pack / A Study in Snoopy 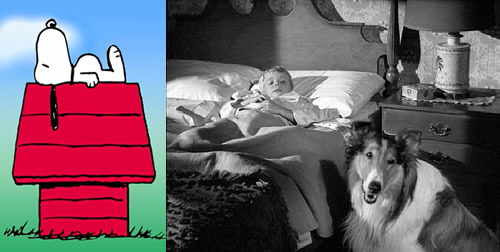 Snoopy and Lassie tell us a lot about the dramatic changes in the status of the family dog that began in the mid-twentieth century.

Snoopy has his famous dog house. He lives outside. He is fed outside. This is consistent with the life of most family dogs up to the time that Charles Schulz began drawing his Peanuts strip. Dogs that were not work dogs were usually kept for protection. Snoopy does neither. Snoopy is primarily a companion for Charlie Brown.

At the time of Snoopy’s rise to fame millions of Baby Boomers like Charlie Brown, living in suburbia, were given dogs as companions. Snoopy of course does a bit more than a typical suburban dog. He is one of the gang. Even though he sleeps outside, he often ventures indoors. Today fewer family dogs have dog houses and are kept outdoors. Most family dogs live and sleep indoors. In the cartoons Snoopy is an equal of the other kids. He has human smarts and human abilities no real dog has – not even Lassie.

Lassie is another case. She doesn’t have the luxury of animation, yet she is also able to portray a super intelligent dog. Her special abilities are used to help out around the farm, so she could even be classified as a traditional work dog and farm animal. However she is foremost a pal and guardian to Timmy, an idealized bucolic Baby Boomer. Lassie is a full member of the family circle. She comes and goes in and out of the house, as freely as any human. Unlike Snoopy she gets to sleep in Timmy’s bedroom. No dog house for Lassie.

Snoopy, Lassie and a few other celebrity dogs helped revolutionize the way family dogs have been treated since. They also foreshadowed the deeper understanding of canine intelligence we now have.