Your Dog's Heart Blog
HeartOfYourDog.com / Family/Pack / History of The Dog 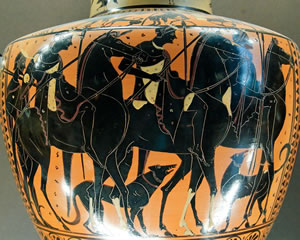 History of The Dog

Nobody knows when the domestication of gray wolves began. The contributions of these proto-dogs to human survival is clear though. Their tracking skills helped hunters, while their ability to sense predators alerted the community to nearby dangers. Native Americans even used dogs as pack animals before the introduction of horses. Through selective breeding, special skills like herding and pointing enhanced the role of dogs in human survival. Companionship evolved along with everything else as a secondary benefit.

In the U.S. by the early 20th century dogs were kept mainly for protection. The classic junkyard dog is an extreme example. Beating dogs for control and to bring out a mean streak was an acceptable practice.

Children have an intuitive understanding of dogs. A generation of adults who bonded with dogs in youth have grown to accept family dogs primarily as household companions. The care of family dogs today is a vast improvement over their treatment only a few decades ago.

Prior to these dramatic changes, dogs were viewed as property with barely more concern than a piece of furniture. Now, we know that dogs are thinking feeling animals with a set of emotions similar to ours. MRI examinations and behavior studies have demonstrated that dogs have a complex inner life that deserves our respect.

In spite of all the improvements, approximately half the dogs born in this country today will wind up abused and/or euthanized.